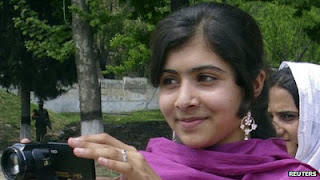 we dont know because media has not shown us.

The situation of Muslims is so pathetic now a days that we only see what media tries to show us. They ae maligning the image of Muslims and we are just supporting them.. :(

Malala outrage was so enhancely and effectively carried out by media that we all started to file a negative scope in or eyes towards Taliban..

But do you know that on the same day an Afghan Muslim girl was raped and brutally murdered by american army????

This news didnt touch the media at all why?????

Malala's blood and that Afghan lady's blood was different!!!!!

The only difference is that Malala was attacked by a muslim and whereas Afghan girl was murdered by an american... Where is our conscience????

So please check out the media propoganda!!
They just want to use our name and malign the image of muslims..

Email ThisBlogThis!Share to TwitterShare to FacebookShare to Pinterest
Labels: JIHAD